I recently got us all memberships with the RSPB. The munchkin got a fantastic nature pack which including a bug hotel (I’ll write about it properly soon.) The munchkins love of anything nature related has been cemented, so much so that she asked for a bird house and feeding table for her birthday for the garden!

When I found out that a local park runs junior ranger sessions during the summer holidays I knew that she would really enjoy it. Plus the sessions are all free and we are really lucky to have such a fantastic country park to explore so close to home!

Today we went on a Minibeast Safari. Because of her age I had to stay with the munchkin, not too much of a chore. My Gran in Law sat in with the Froglet so it was a nice opportunity to spend some time with her, just the two of us.

The bug hunt was led by a lovely and knowledgeable, actual ranger, named Chris, who gave information as we were walking and hunting and was happy to answer any questions the children had. We set off on our Safari. It was raining, that drizzly rain that soaks you without you realising, which was a shame considering the weather we’ve had recently, but it didn’t put a dampener on the afternoon.

First we came to a wooded area and spent time looking under logs and looking in the leaves for tiny creepy crawlies. Each of the children had a pooter which gave them the ability to suck bugs up into a tub so they can have a closer look. 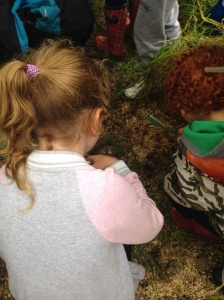 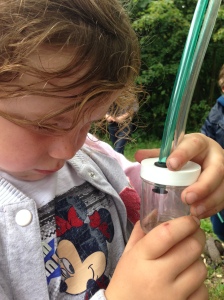 After a little searching the munchkin found a centipede, which couldn’t be sucked into the tube so we had to catch it! 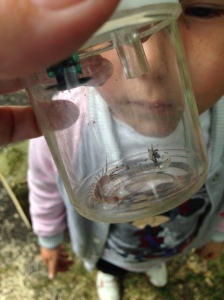 Getting slightly obsessed with being able to get a tiny creepy crawly in the pooter the way it should be used, she quickly gave the centipede to a little boy and went on the hunt for something smaller. Eventually she found a little spider and an ant, she was pretty chuffed with herself and a little out of breath after spending quite a lot of time virtually inhaling the forest floor! 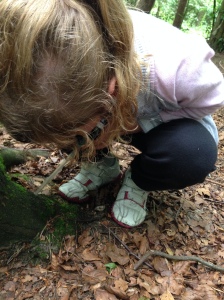 Our hunt then led us to the pond for some pond dipping. As we were walking the Ranger caught a butterfly, the kids were fascinated and everyone wanted a closer look!

I remember pond dipping when I was little so it took me right back. We saw sticklebacks, tadpoles and even some froglets which really made me chuckle! 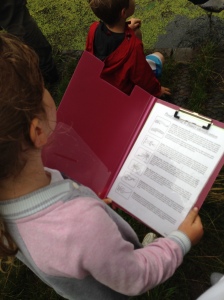 Last stop on our safari was to the meadows to try to catch the bugs in the long grass. This wasn’t that successful as it was really raining by this point so the bugs had all gone under cover. Someone did catch something called a parasitic wasp which does pretty awful things to caterpillars! 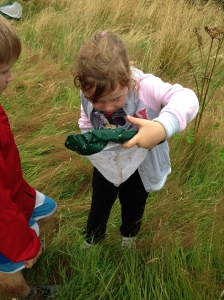 We really enjoyed the bug hunt, I’m achy now, I’ve not done much walking the past few weeks and the munchkin was tired when we got home but excited to tell her daddy all about her adventure!

I’m looking forward to Thursdays activity and I’m sure the munchkin is too!