Bank holiday Monday did not start well. We had been busy all weekend, I was at Blog On MOSI (post coming soon) on the Saturday, Mr C had wasted the day in bed on the Sunday ‘cause he’d stopped up to watch the boxing so I was determined we were going to get out of the house and have a bit of family time. In the morning the munchkin had an uncharacteristic lie in, leading to us spend far too much time in our PJs drinking tea, eating toast and trying to decide where we were going to go.

I soon started sulking, no one was moving, there was too much bloody washing that had been neglected, the munchkin decided to go outside to play with her friends and Mr C wasn’t coming up with any good ideas of where to go, even though I had already suggested the Victorian May Day at Quarry Bank Mill. I then threw my toys out of the pram and declared we wouldn’t bother!! Cutting ones nose off to spite ones face.

Anyway, once the washing was under control and we had all managed to get dressed and I had put my dummy back in we decided that we would actually go out. We set off, after a mini detour to get petrol (grrr!) quite late in the day. As I was driving and Mr C couldn’t come up with a better idea we made our way to Quarry Bank Mill. The traffic was quite bad once we got closer, it’s about 40 minutes away but took longer that day. We drove passed Manchester airport so managed to do a bit of plane spotting whilst we were queuing to get in. By the time we got in, parked up, bought tickets (signed up for a National Trust membership!! Exciting!!) it was lunchtime. Because we had left unprepared, we were picnic less. If you’ve read any of our other days out, you’ll know we love a picnic! We knew we would need to eat before we did anything else, we’re all grumpy if we’re hungry. The queue for the café was out of the door (apparently May Day at Quarry Bank Mill is the busiest day of the year) so we decided to get Jacket Potatoes from the van in the meadow.

The queue for the spuds was ridiculous and because they had stuck Artisan on the blackboard they charged £5.50 a spud! Have you ever heard of an Artisan Jacket Potato? Outrageous! With no other option I had to spend close to £20 on 3 spuds and 2 drinks. This is why I take a picnic everywhere! Mr C had found us a spot to sit near the maypole (we leave a picnic blanket in the car) so once I had got said expensive spuds, which didn’t taste any different to the ones I do at home, and sat down, the sun had come out and we managed to start to relax and enjoy the day.

The setting for Quarry Bank Mill is stunning, we didn’t go into the Mill or really explore as we thought we would go back when it was a bit quieter and we could have a look round properly now we’re fully fledged National Trust members. There was still plenty to do in the meadow and gardens. Lots of old-fashioned fun. All the staff were dressed in Victorian costume and in character which really added a little magic.

Whilst we were eating our spuds we watched the May Pole dance, the munchkin was very impressed with the dancing and how the ribbons didn’t get knotted together. We wandered into the gardens to watch the Punch and Judy show and try out some Victorian toys. We spent ages at the toy marquee, as she tried stilts, skipping and a whole host of other wooden toys. We then had a look at the sewing tea party table. The munchkin had a go at adding a strand of material to a rug. It was interesting to find out how these would have been made out of old clothes and rags, and the lovely lady giving the talk was great at setting the scene. There was also a dress up marquee and a craft area but they were really, really busy and the munchkin decided she didn’t want to wait around to look.

We bumped into a policeman, who was in character and very funny! He let the munchkin sit on the penny farthing for a photo.

As the swing and the chair flight had an additional cost (only a £1 but remember I’d just spent all my cash on spuds) we said she could pick which one she went on and as the queue for the swing was huge she opted for the chairs. 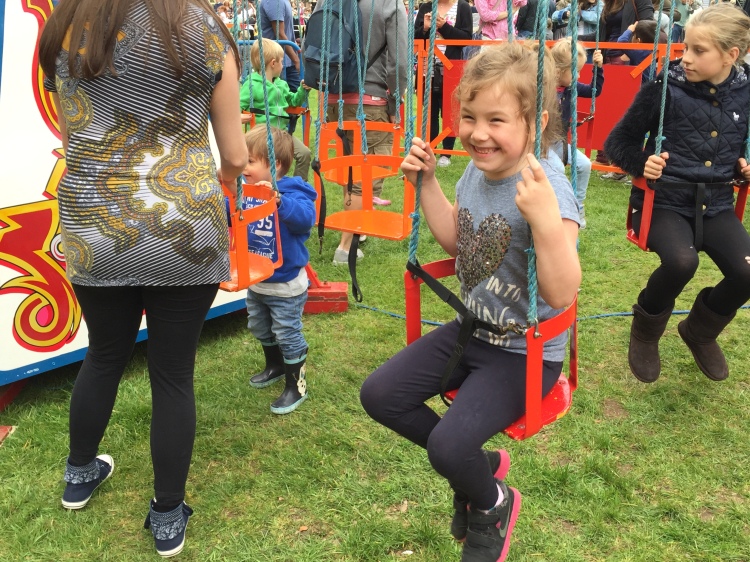 By this time it was getting quite late in the afternoon, we had all but ran out of cash and the froglet would need feeding soon so after the munchkin had enjoyed a very long ride on the chair-o-flight we decided to head home, with the promise that we would return to Quarry Bank Mill to have a proper explore of everything else that was there.

We had a really lovely day, even though it was all a bit last minute, I love this type of day out or event. Have a watch of the video below! The only thing that was missing was a good slice of cake and a nice brew. We will definitely be visiting again next May Day, we’ll just be a little more prepared next time.

3 thoughts on “May Day at Quarry Bank Mill”