Did you know breast is best when it comes to feeding your baby? Of course you did, that’s just a silly question.

Now, I know this. I knew this when I had the munchkin six years ago and chose to bottle feed her from birth. I remember at an appointment telling a midwife I was going to bottle feed her and she said I ‘looked like the type of woman who would breastfeed.’ To this day I’m not really sure what a breastfeeding mum should look like. I just knew it wasn’t for me, I knew that the stress of being the sole provider of food for my baby with limited help would be no good for either of us. I stand by that choice to this day.

When I was pregnant with the froglet I made the same choice, I was going to bottle feed. Even when a concern was raised about his oesophagus being blocked the consultant and the midwives didn’t make me feel any less of a mummy because breastfeeding wasn’t my choice. Unfortunately, things didn’t go to plan in the old labour department. He was born with no heart beat, no oxygen to his brain and had to undergo hypothermia therapy for 72 hours. The consultants were very honest with us, they understood I had chosen to bottle feed him but if he survived the 72 hours and if he regained his suck and swallow motion there was a chance that he wouldn’t be able to digest formula milk all depending on whether any of his organs had been permanently damaged.

This was when I decided to express my breast milk. Well at first that’s all I could do as he wasn’t fed at all those first 72 hours. At that point I would do anything it took to give him as much help to fight. I was so helpless, I couldn’t even hold him but I could store up the milk that might be the only things he could eat. I was quite happy to pump. I still didn’t want to breast feed. I knew the way stress and tiredness affects my body and I knew breast-feeding still wasn’t for me. Pumping though, that worked!

We were very lucky, after 72 hours and a day of warming up our little man had retained his suck and swallow reflex and none of his organs were damaged, he went from strength to strength pretty rapidly and I kept pumping, he was fed through a tube at then a bottle. After a while I wasn’t producing enough breast milk for his hungry self so we combination fed, mixing my milk with formula milk, always from a bottle. Did you know if you combination feed, mixing the milks together helps the baby digest it easier? Something I learnt from the special baby care midwives. I stayed a pumping, combination feeding mummy until the froglet was nearly 4 months. At that point we realised we were using far more formula than breast milk, no matter what I did, I just couldn’t up the supply so slowly and quite reluctantly I stopped. Yes sometimes I felt like a cow being milked and breastfeeding probably would have been easier but this really worked for us as a family. It was the right choice for me, for us.

Sometimes it isn’t possible for mums to breastfeed. Some mums choose to bottle feed, yes these mummys know breast is best, it’s still their choice. Sometimes it doesn’t work out for new mums even after they’ve tried and they will have really tried. Some mums breastfeed for months or years. Some of those mums are naturals and some find it really difficult but still continue. Some mums feel guilty they didn’t or weren’t able to breast feed. Some mums choose to pump and to combination feed. I salute all of these women and you should too, because they are doing their very best to make sure their precious little one never goes hungry. Being a mummy is hard, especially a mummy to a new baby, we should support all these choices and all of these women for the fantastic job they’re doing.

Munchkin have introduced an innovative new bottle feeding range, LATCH. Perfect for mums who chose to combination feed their bundles of joy.

With the goal of helping new mums reach their breastfeeding goals, the revolutionary Munchkin LATCH™ bottle feeding system is designed to offer mum everything she needs to make the transition from breast to bottle feeding as natural and comfortable as possible, for mum and baby.

Following careful and extensive research with mums and experts, LATCH™ is an innovative range of revolutionary newborn feeding products. Tried and tested, the LATCH™ feeding system has been developed in partnership with Lactation Consultants, Midwives, Health Care Specialists and a panel of Experienced Mums.

The LATCH  teat has a truly innovative accordion base that moves, stretches and pumps, just like the breast, ensuring baby establishes and maintains a proper latch and continuous connection to help reduce the symptoms of colic.  As baby grows, so does the LATCH™ teat range; stage 2 and 3 teats allow Mum to increase the flow as baby’s feeding demands increase.

The slow flow rate of the LATCH™ teat mimics mums’ breast milk flow for a more natural feed, whilst the unique anti-colic valve on the base of the bottle ensures air bubbles do not pass through the milk, reducing the risk of colic.

1. Helping baby sustain a NATURAL LATCH: experts agree a proper latch is achieved when mum’s nipple reaches all the way back to baby’s soft palate. The unique accordion-style teat on LATCH™ gently flexes and stretches like the breast helping baby to latch correctly

2. Provides a more NATURAL FEEDING experience: when breastfeeding, baby controls the flow of milk by applying pressure to the base of mum’s nipple. The LATCH™ bottle mimics mum by compressing to release more milk as baby pushes against the teats base, for a comfortable and fulfilling feed.

3. While feeding, it provides NATURAL MOVEMENT as the accordion-style teat flexes as baby moves her head; providing a continuous latch, reducing the ingestion of air. The one way, easy to clean anti-colic valve located at the base of the LATCH™ bottle allows for milk to flow while ensuring air bubbles do not enter the milk or travel through it.

I am able to offer one lucky reader the chance to win a fantastic LATCH Newborn Starter Kits (RRP £29.99) which has everything a mum needs to get started. Complete with two 4oz bottles, two 8oz bottles, four Stage 1 teats and two Stage 2 teats, the set also comes with a bottle brush for easy cleaning. A mini brush designed specifically for cleaning the teats is also included. 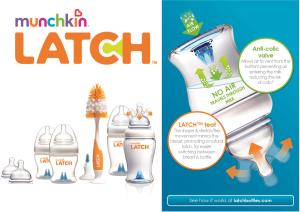 To be in with a chance of winning all you need to do is click on the link and complete the entries below:

This Giveaway is open to UK entrants only

6 thoughts on “Being a Pumping Combi Feeding Mummy”